Top 7 Most Mind-Blowing Creatures of the Deep

More than 70% of the Earth's surface is covered by water. Our planet is coated with 1.3 billion cubic kilometers of the stuff, the majority of which resides in our oceans at an average depth of nearly four kilometres. The oceans provide us with food and water, power our weather, regulate our climate, and perform countless other functions without which life on Earth would quite simply not exist. If we were being accurate, we would better call our planet not Earth but Water.

Despite its importance, we know a staggeringly small amount about what lives beneath the waves on our tiny blue planet. We have better maps of the Moon and the surface of Mars than we do of our own sea-bed. Currently there exist only five deep-ocean submersibles capable of reaching the 'abyssal plain' that covers more than half of the Earth's surface, and they each cost about $25,000 a day to operate. As a result, humans may have scrutinised 'perhaps a millionth or a billionth of the sea's darkness. Maybe less. Maybe much less.'

With that sobering thought in mind, we cannot begin to imagine what fantastic creatures might lie beneath the waves, awaiting discovery. For all we know, our oceans could be teeming with stranger and more wonderful beasts than anything we have yet laid eyes on. If the following seven animals are anything to go by, what lies beneath the unexplored deep must be truly mind-blowing.

This crafty octopus contorts its body and arms and changes its skin colour and texture in order to mimic the physical likeness and movements of other species with startling accuracy. Mimicry allows it to trick predators into thinking that it's not a tasty octopus, and also enables it to prey upon animals that would ordinarily flee: It can imitate a crab as an apparent mate, only to devour its deceived ‘suitor’.

All octopuses can change colour and texture, and many can blend with the sea floor (for example in this kick-ass video), however the mimic octopus is the first species ever observed to impersonate other animals.

Mimic octopuses have been observed to immitate the following animals:

Also known as Spookfish, Barreleyes are named for their barrel-shaped, telescoping eyes. Despite appearances, what appear to be 'eyes' are other sensory organs; the real eyes reside inside the fish's fighter plane canopy style forehead.

Barreleyes remain just below the limit of light penetration and use their sensitive, upward-pointing tubular eyes — adapted for enhanced binocular vision at the expense of lateral vision — to survey the waters above. The high number of rods in their eyes' retinae allow barreleyes to resolve the silhouettes of objects overhead in the faintest of ambient light (and to accurately distinguish bioluminescent light from ambient light), and their binocular vision allows the fish to accurately track and home in on small zooplankton such as hydroids, copepods, and other pelagic crustaceans.

To better serve their vision, barreleyes have large, dome-shaped transparent heads; this presumably allows the eyes to collect even more incident light and likely protects the sensitive eyes from the nematocysts (stinging cells) of the siphonophores from which it is believed the Barreleye steals food. It may also serve as an accessory lens, or to refract light with an index very close to seawater.

The Vampire Squid (lat. Vampyroteuthis infernalis - literally 'vampire squid from Hell') is somewhat of an anomaly, sharing some characteristics of both squids and octopii plus unique retractile filaments which justify its placement in an order of its own.

It is an extreme example of a deep-sea cephalopod, thought to reside between 600-900 metres. At the upper bounds of its territory, the view from below is like the sky at twilight. The highly sensitive eyes of deepwater denizens are able to distinguish the silhouettes of other animals moving overhead. To combat this, the vampire squid generates its own bluish light (bioluminescence) in a strategy called counterillumination: The light diffuses the animal's silhouette, effectively "cloaking" its presence from the watchful eyes below.

Like many deep-sea cephalopods, Vampire Squid lack ink sacs. If threatened, instead of ink, a sticky cloud of bioluminescent mucus containing innumerable orbs of blue light is ejected from the arm tips. This luminous barrage, which may last nearly 10 minutes, is presumably meant to daze would-be predators and allow the Vampire Squid to disappear into the blackness without the need to swim far.

Despite being only about an inch or two long, these little guys snap up the title of 'loudest animal in the sea', beating out much larger animals like the Sperm Whale. They have disproportionately asymmetrical claws, one of which is larger by half than the entire body. The claw can be on either arm of the body, and unlike most shrimp claws does not have pincers at the end. Rather, it has a pistol-like feature made of two parts. A joint allows the "hammer" part to move backward into a right-angled position. When released, it snaps into the other part of the claw, creating a cavitation bubble that generates acoustic pressures of up to 80 kPa at a distance of 4 cm from the claw.

As it extends out from the claw, the bubble reaches speeds of 60 miles per hour (97 km/h) and releases a sound reaching 218 decibels. The pressure wave is strong enough to kill small fish, stun larger fish and break small glass jars. The snap can also produce a faint sonoluminescence from the collapsing cavitation bubble which is not visible to the naked eye. As it collapses, the cavitation bubble reaches temperatures of over 5,000 K (4,700 °C). In comparison, the surface temperature of the sun is estimated to be around 5,800 K (5,500 °C).

The shrimp's snap is used for hunting (hence the alternative name 'pistol shrimp'), as well as for communication. When feeding, the shrimp usually lies in an obscured spot, such as a burrow. The shrimp then extends its antennae outwards to determine if any fish are passing by. Once it feels movement, the shrimp inches out of its hiding place, pulls back its claw, and releases a "shot" which stuns the prey; the shrimp then pulls it to the burrow and feeds.

It's technically impossible to study a Turritopsis nutricula long enough to prove it, but biologists believe this species of jellyfish to be capable of genuine immortality. This is because it can revert to the polyp stage at any time in its life. It is the only known case of an animal capable of reverting completely to sexual immaturity after having reached sexual maturity as a solitary stage.

Most jellyfish species have a relatively fixed life span, which varies by species from hours to many months. The Immortal Jellyfish, however, is capable of cell transdifferentiation, which allows the jellyfish to alter the differentiated state of cells in successive part of its body and transform them into a new cells. Theoretically, this process can go on infinitely, effectively rendering the jellyfish biologically immortal, although in nature most are likely to succumb to predation or disease. 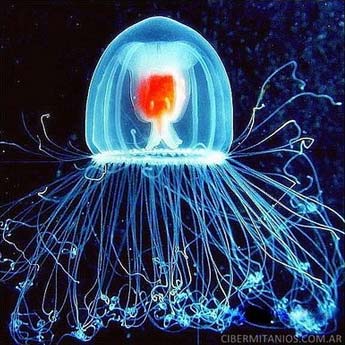 ‘Across vast aeons of time, intellects vast and cool and unsympathetic regarded this earth with envious eyes, and slowly and surely drew their plans against us.’

Although it looks like something H.R. Giger might have created for Alien, the giant isopod is a real creature. It's related to the common woodlouse, and it's not hard to see how: They are both protected by a rigid, calcareous exoskeleton composed of imbricate segments, they both use gills to breathe, and they are both able to curl up into a ball exposing only their tough shell. However whilst woodlice are a few millimetres long and usually live under rocks in your back yard, giant isopods grow up to thirty inches long and live either up to two kilometres deep under the sea, or in your nightmares. They have two sets of antennae, seven pairs of legs, and two large compound eyes that watch unblinking for the right moment to rip your face off and eat it.

This terrifying deep-sea crustacean is a good example of 'abyssal gigantism' — the term for the super-sizing effect of lightless depths which is responsible for mammoths like the Colossal Squid and the Japanese Spider Crab. Nobody's sure exactly why it happens; all we know is that the deepest parts of the ocean have the same effect on animal species that all those fried peanut butter and banana sandwiches had on Elvis Presley. 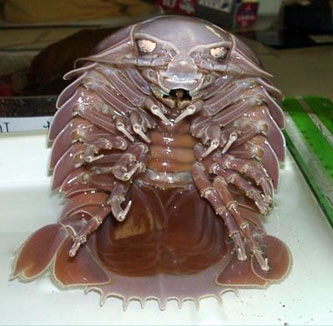 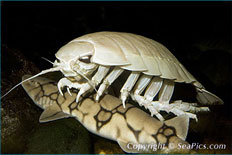 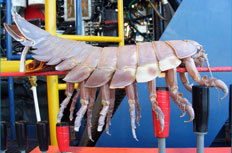 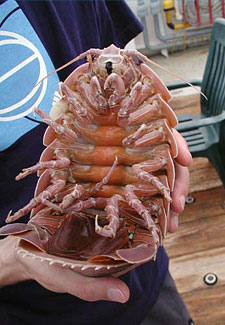 The giant isopod is served at restaurants in Taiwan, where apparently it's not unusual to eat nightmarish monsters.

Anglerfishes are named for their characteristic mode of predation, wherein a fleshy growth from the fish's head (often with a bioluminscent light on the end) acts as a lure to attract their prey. Once an unwitting victim approaches close enough to the lure, the anglerfish extends its cavernous jaws and devours it.

Some anglerfish employ an unusual mating method. Because individuals are presumably locally rare and encounters doubly so, finding a mate is problematic. When scientists first started capturing ceratioid anglerfish, they noticed that all of the specimens were females, and almost all of them had what appeared to be parasites attached to them. It turned out that these 'parasites' were highly reduced males.

Male ceratioids are significantly smaller and weaker than females, and may find it difficult or impossible to feed without finding a mate. Hence, the male ceratioid lives solely to find and mate with a female. Fortunately they are born with an exceptional sense of smell, which helps the male to detect the pheromones that signal the proximity of a female anglerfish. When he finds a female, he bites into her skin, and releases an enzyme that digests the skin of his mouth and her body, fusing the pair down to the blood-vessel level. The male then slowly atrophies, first losing his digestive organs, then his brain, heart, and eyes, and ends as nothing more than a pair of gonads, which release sperm in response to hormones in the female's bloodstream indicating egg release. This extreme sexual dimorphism ensures that, when the female is ready to spawn, she has a mate immediately available. Multiple males can be incorporated into a single female, which means that it is possible to find anglerfish with more pairs of testicles than George Washington.